Learn Various Aspects of What is Digital Forensics ?

Before we go on and talk about what is Digital Forensics, let us first talk about the meaning of Forensics. Forensics refers to the techniques or the tests that are conducted to get into the depth of a crime.

For example, A robbery has taken place at a house. Police will come in and try to find the fingerprints of the robbers and using those fingerprints, the robbers will be identified by the police. This is forensics.

In the modern-day world, a lot of crimes take place through the use of computers. Computers have evolved a lot in the past few years, and everything from banking to shopping can be done digitally. So naturally, a lot of criminals have come up that make use of different techniques to carry out crimes digitally. This is where Digital Forensics steps in.

What is the Difference Between Traditional Crimes and Cyber Crimes?

The very basic difference between Traditional Crime and Cyber Crime would be – Cyber Crime involves all the crimes that are carried out, related to the use of technology such as computers, the internet, etc. while traditional crimes involve everything else.

What is Digital Forensics?

Digital Forensics involves techniques that can be used to identify and detect the evidence from crimes that were carried out digitally. This evidence is collected to be produced in a court of law. In simpler terms, Digital Forensics comes into the scene whenever a digital crime happens, or when a crime is related to computers.

For example, A person steals the data from an organization and manipulates it for his benefit. He then stores the data on an encrypted hard drive. The Digital Forensics department will then use various techniques for the decryption of the hard drive and will produce the evidence in front of a court of law.

What is the Need for Digital Forensics?

Traditional forensic techniques and crime-fighting units like Police are needed for preventing different traditional crimes. Similarly, Digital Forensic techniques are important for the prevention of Cyber Crimes. There is especially a Cyber Forensics Department for different governments. They can be both private and public.

Cybercrimes came into origin during the late 1980s and early 1990s. The term ‘Computer Forensics’ was coined for the first time in that era only. The US and UK came up with small units that dealt with issues related to Cyber Crimes.

Then in the early 1990s, officials began to realize that there was a need for setting some protocols and standards involving computer forensics. Various conferences were held at Police Staff College at Bramshill from 1994 to 1995. Officials from the US and UK attended the conferences to come up with powerful protocols and standards. The development of various guidelines took place during this period. With time, these guidelines kept evolving and are now widely accepted as forensics standards. The term computer forensics or cyber forensics also evolved into Digital Forensics.

Advantages and Disadvantages of Digital Forensics

Just like every other thing in the world, Digital Forensics has its advantages and disadvantages. Let us take a look at them.

Let us now talk about the Digital Forensics process. This topic includes the steps that are taken during a Forensics Investigation. 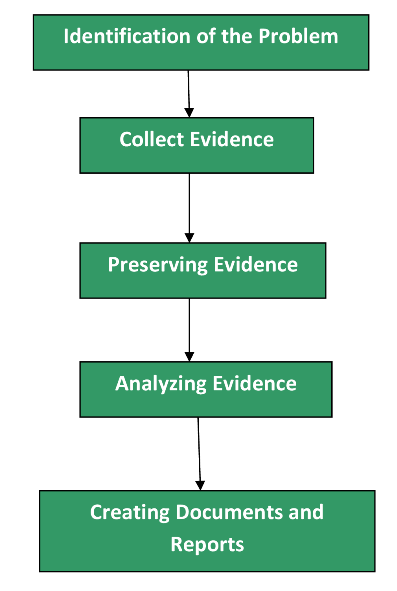 Identification of the problem

The first step in the process of investigation is identification. During this step, the Forensics investigators try to figure out the intensity of the crime and how it was carried out. During this phase, certain guidelines are followed by the Forensics Investigator so that the evidence/ data does not get damaged.

The second and the most obvious step in a Forensics Investigation is to collect evidence. This evidence includes everything from emails, to share files, to hard disk drives, etc. The criminal’s and the victim’s digital signatures are traced to collect all the necessary data that can be used as evidence.

Once the evidence has been collected, it is very important to preserve it. The original evidence is not tampered with, and its replica images are created by the Forensics Investigators. Further work is usually done on these images rather than the original evidence to keep it preserved.

The final step in the process is reporting. All the analyzed data is then made into a report that tells about the crime, how it took place, what steps did the criminals use and how was it implemented.

Digital Forensics is a vast field on its own and has numerous types that are discussed below.

This software is open source and is built on Linux. The database is used to store data in PostgreSQL. This tool helps with numerous things and can be used by both professionals and non-professionals. You can recover deleted files using this software and can access remote devices.

This is one of the most popular tools in Digital Forensics. It is an amazing tool because it is open source, which means it is free for everyone to use. This tool can be used for the recovery of deleted files and for accessing remotes.

If you are seeking a tool that is rich in features, you do not need to look beyond this one. This tool is run on Windows Operating Systems. Some of its awesome features are Cloning and Disk Imaging, mounting, Checking Data Authenticity, Memory Analysis, Extracting Metadata, Recovery of Deleted files, etc.

When you talk about premium Digital Forensics tools, Registry Recon is the first one that comes to mind. Although it is not free and costs $399, its price is all worth it. Various professionals use it for research purposes.

This tool was specially designed in Python for the design and development of Digital Forensics applications. If you are a developer and are interested in Forensics, try this tool out.

If you are a student but you want to work in a professional environment while still learning, you can grab some good internships. A lot of companies give out vacancies for interns in various fields. Digital Forensics is a comparatively newer field, so a lot of emerging companies want talented interns to work for them.

As a forensics intern, you will have to work with various tools to perform certain tasks. For example, you might have to work in a tool to recover deleted files. In India, these types of internships are a bit less in number as compared to the US and UK, but there are still several opportunities. If you are a student, try to get in touch with a Digital Forensics faculty so that he could recommend you to a company where you can be an intern. You can also browse the internet and look for internships on trusted websites like Internshala.com

In terms of career, Cybersecurity has been booming. There are a lot of jobs coming up in the field of Digital Forensics. If you are a certified Digital Forensics expert or you have done your UG/ PG in Digital Forensics, then you can apply for various jobs in different companies. Most of these companies are based in Metros like Bangalore, Delhi, Hyderabad, etc.

Most of these jobs require you to be an expert on certain tools. So it will be better if you enroll in certified courses of multiple digital forensics tools.