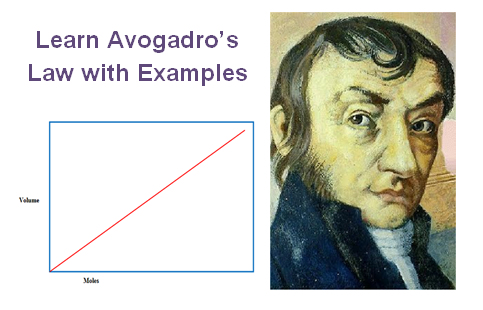 The field of science has been blooming since the last few hundred years. Revolutionary theories have been proposed, and formulas have been discovered that helped in changing the world for better. I wouldn’t be an exaggeration to say that even small formulas like speed = distance/time have helped in bringing about technological development in the world. One of these revolutionary discoveries is Avogadro’s Law. Examples are the best way to understand anything in science, in this article, we will learn or understand Avogadro’s Law Examples.

Do you know who created Avogadro Law, how and why? No, I tell you, The Italian Scientist Amedeo Avogadro introduced the Avogadro’s Law in 1811.

This law is an experimental gas law. Specifically, this law is for an ideal gas. This law is not applicable to real gases because they show some variations. Understand Avogadro’s Law Examples, Ballons.

“At the similar and constant physical conditions like Temperature and Pressure, the two different gases like hydrogen and nitrogen in the same volume contain an equal number of molecules.”

How was Avogadro’s Law Influential?

Avogadro’s law was able to explain how equal volumes of gases at ideal conditions gave an equal number of molecules. Although scientists at that time rejected this hypothesis, it gained acceptance after his death, when other scientists realized how important and revolutionary it was in the field of science. You can understand this law with Avogadro’s Law Examples, Lungs, Tyres, etc.

From the Ideal Gas Equation,

At condition 1 (at constant temperature and pressure),

According to Avogadro’s law,

Assume volume V2 is the twice of the volume V1, So,

Put Value of V2 in equation number (a)

Note: This law is for Ideal gases. In real gases, slight variations and deviations occur.

What is Avogadro’s number?

The above graph is plotted (shows linear relationship) between volume and mole at the constant physical condition. As the volume is increasing, then the molecules are also increasing.

Since Avogadro’s law is for ideal gases, people think that it does not have any real-world Avogadro’s Law Examples and that it is just a hypothesis. But that is not the case. Avogadro’s law has numerous real-world applications, and it explains a lot of things that go on in our day to day life.

The first real-world  Avogadro’s law examples can be seen in our own body. We all know that the lungs help us in breathing. But have we ever wondered about the mechanism? Thanks to Avogadro’s law, it’s easier to understand how our Lungs work.

When we breathe in (inhale), air flows inside our lungs, causing the lungs to expand (increase in volume). From our lungs, the oxygen is extracted and injected into our bloodstream. Then, we breathe out (exhale), causing the Carbon Dioxide (CO2) to pass through, and thus shrinking the volume of the lungs.

All of us love to play games, right? No? Are you not into sports? It doesn’t matter, but if you’re looking for Avogadro’s law examples, you will find them in games like Football and Basketball. When you blow air into a ball, it causes the volume of the ball to increase, as air molecules start to collect inside of it. And if you puncture the ball, all that air will come out with pressure, causing the ball to shrink and create a loud sound. Avogadro’s law comes into play to explain to us all the things that are going on here.

Everyone found yourself in a situation where you got stuck in the middle of the road because of a flat tire? Well lucky if you haven’t. Things like puncture, temperature, or time can cause the tire to lose the air inside it, which decreases the volume of the tire and ruins your trip. When you take your car to the gas station, you also get the tires checked. When air is blown into the tires, they get inflated, and the volume is increased, and your car can move smoothly. This is another of Avogadro’s Law Examples.

One more  Avogadro’s Law Examples is a balloon. Everyone loves balloons. And to bring them to that beautiful state, you have to force air from your mouth into the balloon, causing it to expand to a much higher volume.