What is AI & How it works? How many types of Artificial Intelligence are there? 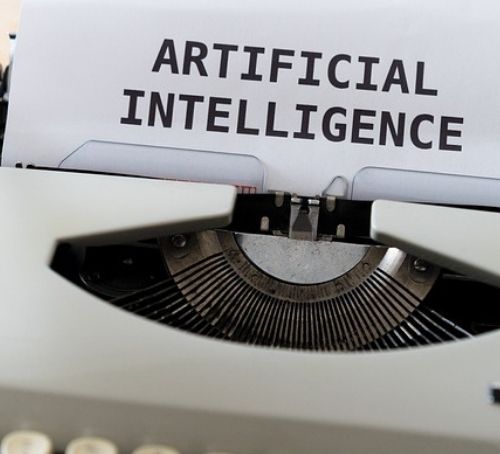 What do you mean by Artificial Intelligence?

The term Artificial Intelligence can be broken down into two words – Artificial (something that is created by humans and does not occur naturally) and intelligence (the ability to think, learn, and understand). Combining these two words, we get a new term that refers to any technology or machine which can learn, understand, adapt, and solve problems.

What is Artificial Intelligence with examples? (AI explained using examples)

Here, I’ll be addressing some of the very common examples of AI that you witness almost every day.

Remember how a few years ago, it was really difficult to get to a place because you constantly had to look at maps and ask for directions from strangers? That is a time long gone by because Google Maps has replaced traditional maps. Ah, Google Maps. Google has made our life easy, right?

So, Maps by Google is a great example of AI. Google Maps uses machine learning to learn from the users’ experiences while driving and keeps improving itself in the process. From learning about the optimal routes to understanding how traffic will affect your journey, Maps makes your ride easy and comfortable.

Who is the father of Artificial Intelligence?

Read on to learn about the different types of Artificial Intelligence.

How many types of Artificial Intelligence are there?

Artificial Intelligence can be categorized into two categories which are simply called Type -1 and Type -2. 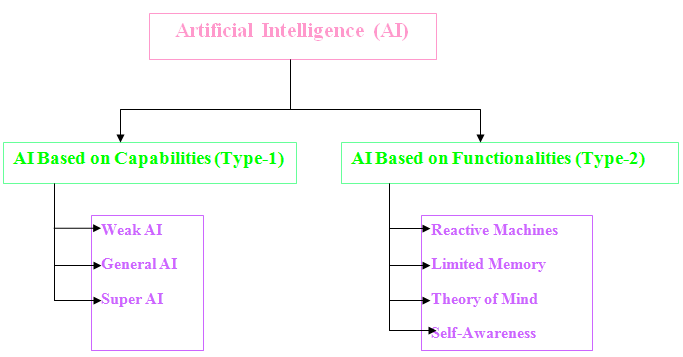 Type -1 is then further divided into 3 sub-categories which are explained below:

Narrow AI is capable of performing a task it is specifically made to do. Narrow AI is trained to perform a certain type of task, so it is very limited in its capabilities. But that does not mean it’s useful. Narrow

AI is what majority of the people use every day. We are almost surrounded by narrow AI in today’s world. It is everywhere. Google Assistant, Amazon Alexa, and Apple’s Siri are some of the most common examples of AI that most people know about. Other examples would include multiplayer games where you play against the computer like Racing Games or best – Chess.

In terms of capabilities, This is far more superior to Narrow AI, as it can perform intellectual tasks at a level that is at par with the human mind. General AI, as of now, is just an idea that we’ll be able to build an Artificial Intelligence System which will be far more superior and smarter than human beings. General AI is still in its conceptual phase. An AI that is smarter than humans doesn’t exist yet.

In one line, it can be defined as the ‘outcome of General AI’. Super AI will be far more smart, efficient, and capable than the human mind, and will be able to perform virtually any task that a human can and more. A super AI will be able to think, learn, create, reason, grow, communicate, etc. on its own. Well, we don’t have a Super AI in existence currently, and it will probably take us a few more years to get to that point.

These Machines are at the most basic level of AI. Reactive machines are not capable of learning through their past experiences, as in, they have no memory. They do not ‘store’ anything. All they do is react to the situation they are placed in.

IBM’s Deep Blue is one of the most well-known Reactive Machines and is famous for beating Garry Kasparov (Chess Grandmaster) in 1997.

One of the best-known examples of Limited Memory Machines is self-driving cars. Self-driving cars have sensors that are capable of detecting civilians crossing the road, or the speed of cars passing by, the condition of the road, etc., and store this data for a limited time. This helps the car make traffic-related decisions and makes navigation possible.

It is still just a concept, but a fascinating one. Theory of Mind AI machines will be capable enough to understand and react to human emotions and will have social capabilities just like humans. We hope that someday we can have an AI system that will be able to laugh at our jokes and celebrates in joy when a baby walks for the first time. Wouldn’t that be amazing?

Self-Awareness AI machines will stand at the ultimate level of Artificial Intelligence. These machines will have their own consciousness, will be highly intelligent (far more superior than human beings), and will be capable of feeling and having emotions. Well, it is just a hypothesis, but something makes me believe that we’ll have something like this soon enough.

How does Artificial Intelligence work?

“Machine Learning is the study of computer algorithms that improve automatically through experience.” (Definition is taken from Wikipedia)

The working of an AI system is actually very complex, but can be understood using these terms that help an AI system in learning:

You feed the system with some labeled data and train it to produce the desired output. For example, you train the system by feeding it with labeled pictures of cats, so in the future, the system will be able to identify a picture of a cat based on the previously fed labeled data.

Unsupervised learning means that the AI system will follow a pattern identification mechanism. This means that the AI will detect patterns in the given data, and will use the results in the future. For example, when you shop on a website, you see a section called ‘similar items’, so the AI identifies the patterns and recommends items that are similar to your previous purchase.

Do you know how you rate your journey in Google Maps? This feedback helps Google’s AI to improve itself by identifying if the ratings are good or bad.

What are the uses of Artificial Intelligence?

Artificial Intelligence has brought along a revolution in technology as it has made our lives so much easier. The ability of machines to learn through experiences has been extremely useful to humans. With massive computing powers, AI systems can achieve things far beyond human capabilities. Artificial Intelligence has made online shopping, self-driving cars, digital navigation, video games, etc. possible.

How Artificial Intelligence will change the future?

AI makes automation possible. The advancement in Artificial Intelligence is making automation of manual tasks possible and more efficient. In the future, AI will totally change the face of employment by automating most of the work that was previously being done manually.

But don’t worry, this doesn’t mean that you will become unemployed. It actually means the opposite. The advancement in AI is going to create a lot of employment opportunities

AI will contribute to not just the economy, but also other fields such as Education and Transportation. Automated transportation means more efficiency, so travel will become easier.

In education, everything will soon be digitized, and AI will be able to make use of facial recognition features to study the expressions of students. This will help them figure out if the students are engaged or bored, hence, improving themselves and creating a better experience.

Other fields that will be affected by AI are Healthcare, Manufacturing, Media, and Customer Service.

What are the applications of Artificial Intelligence?

Some well-known applications and benefits of Artificial Intelligence are:

1) Navigation and Transportation: Google Maps has been a bliss since it has made travel a lot easier.

2) Streamlined Manufacturing: AI has made streamlined manufacturing easier as huge amounts of data are being processed in milliseconds.

4) Human Resource Management: Being in HR is a tough job. There is a lot of work to do and too little time so things become messy. But AI will be able to automate a lot of HR tasks, making it easier for employees to interact with people and get the job done.

5) E-commerce: Artificial Intelligence has done wonders in E-Commerce. Things like banking, online shopping, etc. are being more efficiently done because of AI.

I hope, you enjoyed this article. If you have any queries, please, feel free to ask.